There are at least three known issues, all resulting from the combination of WSL 2 and a VPN. I will demonstrate with the Paloalto GlobalProtect solution, but other VPN clients have similar problems.

I will cover the first issue in this post.

WSL 2 contained significant changes in the network stack implementation. With WSL 2 the networking is done through a virtualized Ethernet adapter with its own unique IP address. This way is flexible but exposes WSL 2 to changes on the Windows host adapters. The differences between WSL 1 and WSL 2 lead to failure in many VPN scenarios.

The problem is a clash between the VPN adapter implementation and WSL 2. A VPN adapter needs to intercept local network traffic to tunnel it. It needs priority on all traffic flowing on the local machine to do so. Most implement this by registering a virtual network adapter with “InterfaceMetric” value 1. Run Get-NetAdapter and then Get-NetIPInterface in Powershell to have a look. 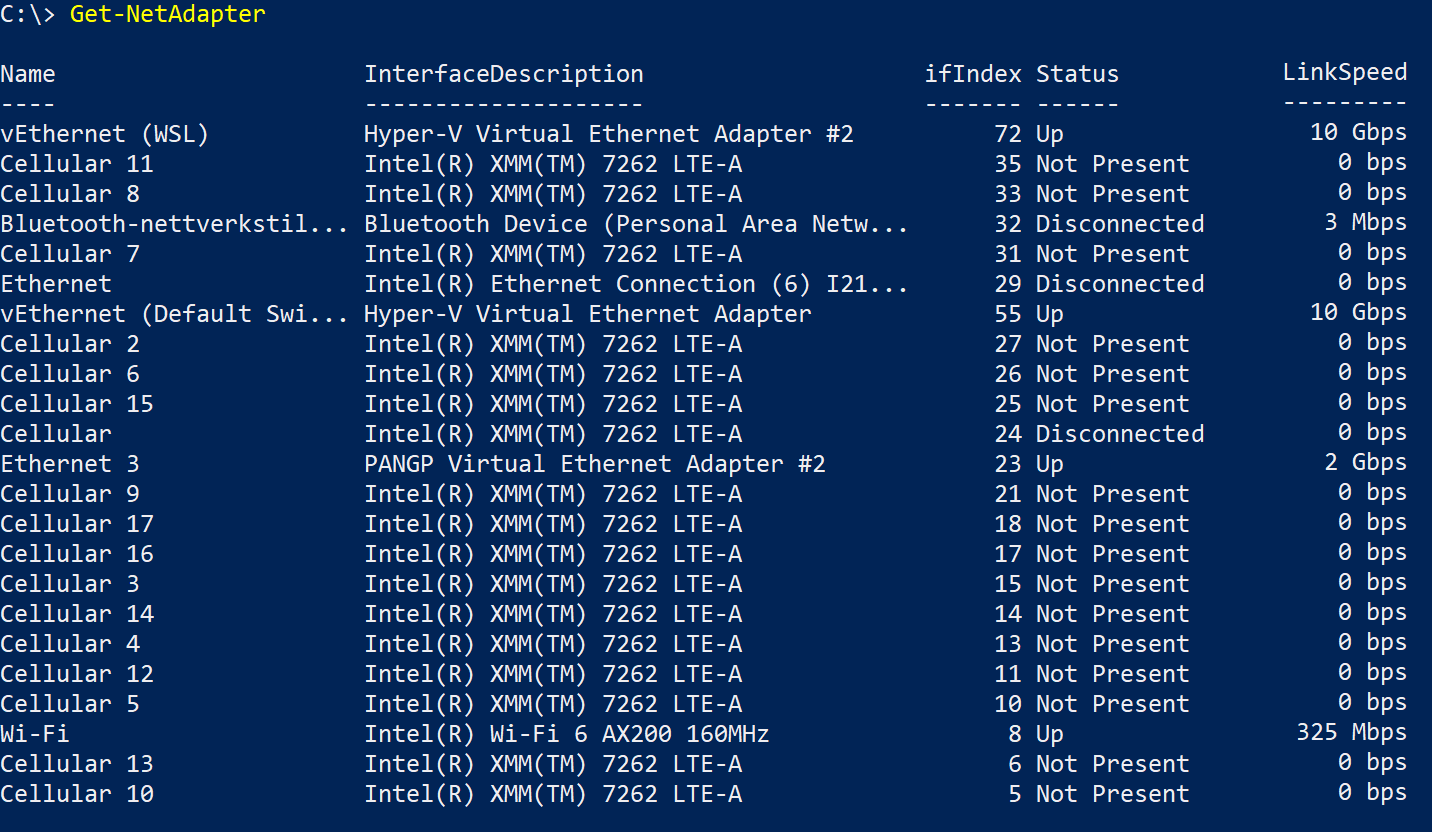 On my machine, you see the VPN network adapter has a description of PANGP Virtual Ethernet Adapter #2, its name is Ethernet 3 and the interface index is 23. If you look at Ethernet 3 in the Get-NetIPInterface screenshot, you see the InterfaceMetric is 1. As high as it gets.

Windows selects how IP traffic flow by adding this metric to a similar route-specific metric on specific routes in your routing table. Adding the InterfaceMetric together with the route-specific metric of all routes in the system creates a table of prioritized active routes. It looks in this table to route all your IP packets. Run route print in Powershell to have a look.

There are plenty of routes, but we are interested in the routes affecting the network in WSL 2. To find out which route those are, run ipconfig /all and check the IP and subnet mask of your WSL network adapter. Also, have a look at the IP of the VPN network adapter. 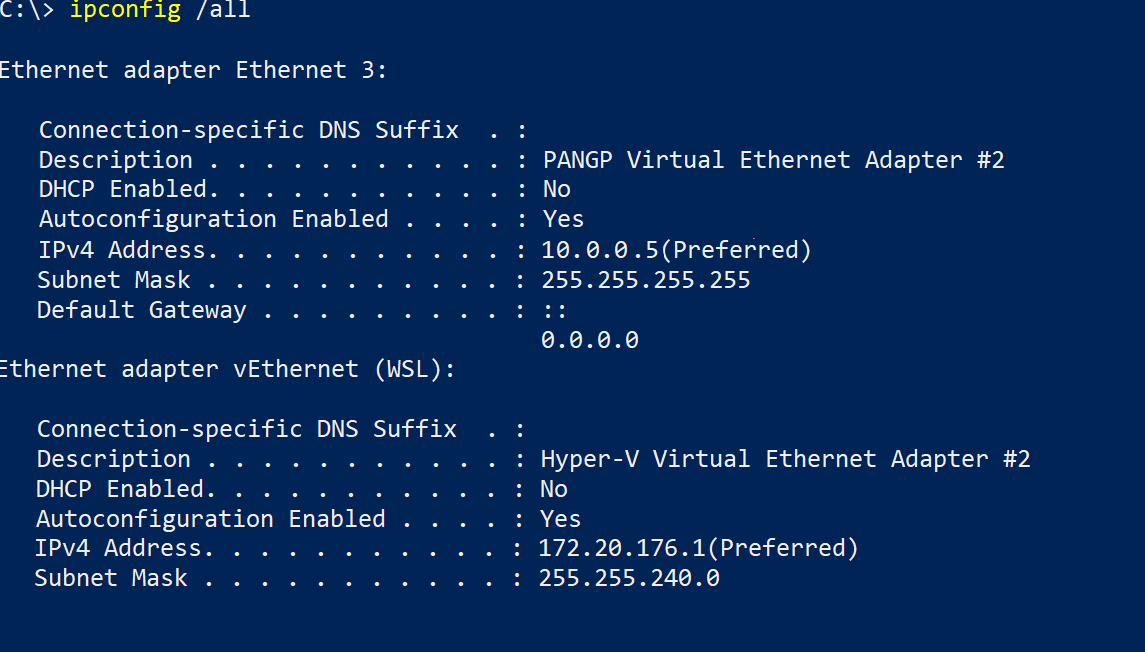 If you run ip addr show eth0 inside WSL 2, you will find eth0 setup with an IP from the range defined by the WSL network adapter IP and subnet mask on the Windows host.

It’s now easy to pick out the relevant rules from the routing table:

The exact numbers might differ, but the important bit is that every time your VPN turns on, a new active route for the WSL subnet with an effective metric of 1 is added to the routes. The new route routes all the traffic from WSL to the interface at 10.0.0.5, the VPN adapter. Metric 1 is the highest priority, so it takes precedence over the other two rules that default the traffic to the WSL virtual adapter. In short, the VPN “hijacks” the traffic.

On the surface, this makes sense. We want all the traffic to go through the VPN when the VPN is on. The only problem is.. the VPN will only forward traffic from the LOCAL COMPUTER, and the traffic coming from WSL 2 IS NOT considered your local computer. The VPN driver considers it as local network instead. Go figure!

So this is our problem in a nutshell: every time you VPN connects, it adds a high priority rule to the routing table for WSL 2. This route will route all WSL 2 traffic directly to the virtual adapter of the VPN. The adapter happily accepts and then drops it all into a black hole, effectively killing all network traffic.

Great! What’s the fix? Easy. We drop the priority route the VPN adds.

Once dropped, the routing will fall back on the other two lower-priority rules and route all the WSL 2 traffic to the Windows host. Once there, it will flow through the VPN as usual.

Once that rule is removed, traffic flows from WSL 2 through your Windows host and into the VPN again. BTW, you need to do this in an elevated Powershell terminal. And unfortunately, you have to do it every time the VPN turns on since the VPN will add the rule giving it priority again.

What’s not the fix?

I’ve seen people suggest a different “fix”. They set the InterfaceMetric of the VPN adapter to a very high value, like 6000. You can do that with a command like this Get-NetAdapter | Where-Object {$_.InterfaceDescription -Match "PANGP Virtual Ethernet Adapter"} | Set-NetIPInterface -InterfaceMetric 6000. This is not a good solution IMHO. A a high value of InterfaceMetric will prioritize every other network adapter over the VPN on the host machine. In effect, you are forcing ALL traffic to avoid the VPN, not just WSL 2! If that is an acceptable option, why not just turn the VPN off instead? Much easier. The whole point of a VPN is to tunnel the traffic through it. Any solution here will need to work THROUGH the VPN, not around it.

Sounds good, give me the exact steps to fix MY computer

So there you have it.

You can use WSL 2 networking with a VPN, but you will have to clear out this route by hand unless you automate it. You will have to delete this rule every time the VPN connects. Reuse the same route delete command as long as the WSL virtual network adapter IP stays the same.

Some enterprise VPN solutions offer the possibility to run scripts on connection events, which would be an excellent place to start for automation.